In Association with
About Bloom
Show Gardens 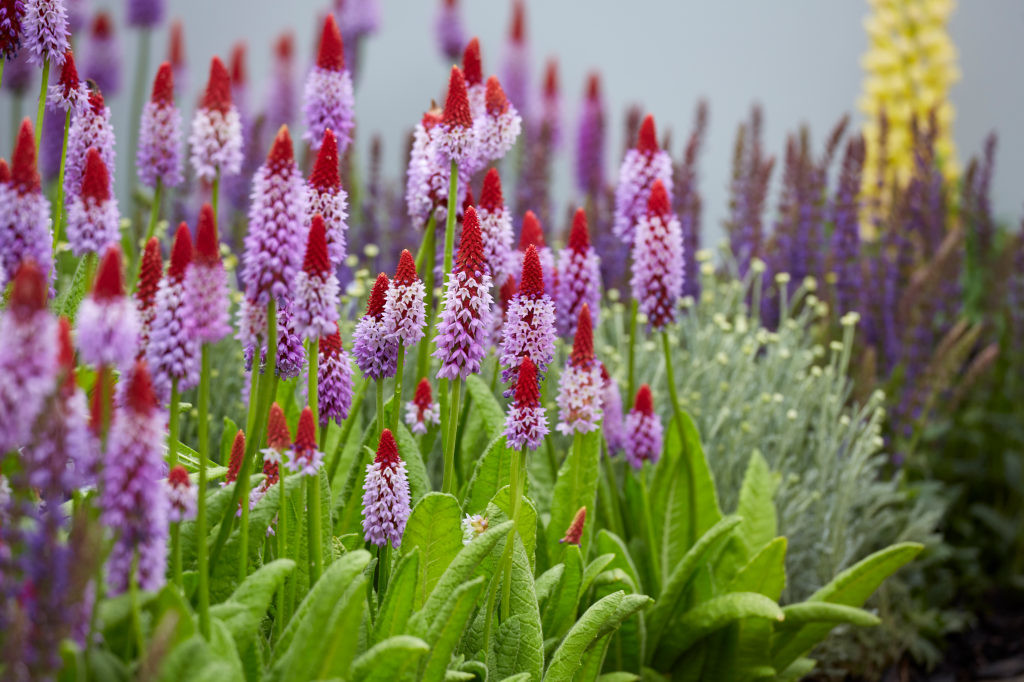 The Gardens you see on display at the show are the culmination of countless hours of design, planning, sourcing of materials and ultimately, hard manual labour on behalf of our garden designers, nurseries and artists.

Bord Bia Bloom aims to exhibit the best of design and horticulture in the form of our wonderful show gardens. Every year, our designers and their contractors work tirelessly to bring these colourful and vibrant creations to life. For the duration of the festival the show garden area represents one of the main attractions and will draw in excess of one hundred thousand visitors over the five days. The designers work to very strict criteria in the design and build of their gardens which are subject to a rigorous judging process involving assessment of:

The compelling world of Botanical and Floral Art will once again feature at Bord Bia Bloom. This year’s exhibition will take place in the Visitors’ Centre, and in excess of 50 pieces of art will be displayed and judged.

We are also proud to exhibit a selection of Postcard Gardens which have grown from strength to strength in recent years. These are effectively pop up gardens built in one day by various training colleges, schools, community groups and organisations and are well worth a visit during the Bloom weekend.

Andrew Wilson is an award-winning garden designer, lecturer, and writer based in Surrey, England. Although trained originally as a landscape architect, he now specialises in creating contemporary gardens in the UK and internationally as consultant to the McWilliam Studio. He is also a Director of the London College of Garden Design, based within the Royal Botanic Gardens, Kew, where he teaches and lectures in garden design, both nationally and internationally. LCGD is one of the leading garden design programmes in the world.

Andrew is a published author and writer, producing his most recent best-selling book, The Small Garden Handbook, for the RHS. He is also a columnist for ProLandscaper magazine. He is a past Chairman and a Fellow of the Society of Garden Designers, the UK’s professional body for garden design, a Fellow of the Landscape Institute, and a member of the RHS Education Committee. He is currently an adjudicator for membership of the Society of Garden Designers and was a judge and assessor for the RHS for 18 years.

Mark Gregory is a highly respected and successful contractor with over 30 years’ experience based in Surrey in the South East of England. He now concentrates on high-end private gardens and quality commercial landscapes.

Mark also specialises in the construction of show gardens for the RHS Chelsea and Hampton Court flower shows and has over 120 medal-winning show gardens to his name, including 55 at Chelsea. He is ambitious and driven in his work. Attention to detail and technical expertise are his trademark and he regularly achieves awards and plaudits from his industry.

Karen Foley is a landscape architect with a background in education and practice in Ireland and the UK. She is the former Head of Landscape Architecture in the School of Architecture, Planning and Environmental Policy at University College Dublin and she currently teaches design studio and landscape theory. Her research interests include landscape change, landscape preference, and community engagement with climate adaptation measures.

After studying at the College of Amenity Horticulture, Glasnevin, Dublin, Paul Maher started his gardening career in Trinity College Botanic Garden in Dartry. He subsequently joined the staff of the National Botanic Gardens, Glasnevin in 1974. After working in all departments he was appointed to the position of Curator in 2003, a role he held until his retirement in 2019.

During a three-year career break in 1987 he developed a garden design practice in the Greater Dublin area. He was a participant in the Millennium Garden in 1988, where he won The Most Marketable Garden Award. He has established himself on the garden lecture circuit in Ireland and has participated in plant collecting expeditions to China and Chile, collecting on behalf of the National Botanic Gardens.

He has exhibited at the RHS Chelsea Flower Show with the Irish Garden Plant Society, designing two silver-gilt medal-winning educational exhibits. Since retiring, Paul has been busy creating a new garden in north Wexford with his wife Edel.

Margaret is Chief Park Superintendent with the Office of Public Works (OPW), where she is responsible for the conservation, restoration and presentation of a number of historic parks, gardens and designed landscapes of national and international significance, including St Stephen’s Green, Phoenix Park, Irish National War Memorial Gardens, Fota Arboretum, and Derrynane National Historic Park.

She has over 30 years’ experience in the management of public parks and gardens, since she qualified from UCD with her degree in Landscape Horticulture in 1989. Her passion for good environmental stewardship supports millions of visitors annually, while facilitating sustainable experiences with nature, built heritage, horticulture and arboriculture.

Margaret, along with her OPW team, is responsible for the restoration and presentation of the Phoenix Park Walled Garden and grounds where Bord Bia Bloom is held annually.

Feargus McGarvey is an award-winning landscape architect and garden designer who has worked on projects across Ireland, ranging from gardens for a private castle in Co. Cork to the Giant’s Causeway Visitor Centre in Co. Antrim. His international experience includes projects in the UK, the Netherlands, Germany, China and Saudi Arabia.

Based in Dublin and Co. Offaly, he works with Mitchell + Associates and is a former President of the Irish Landscape Institute. He is author of national guidance on accessibility for people with disabilities to our landscapes, and on children’s play in urban areas. He has been a judge for the Association of Landscape Contractors of Ireland Awards and is on the submissions panel for the Garden and Landscape Design Association (GLDA). He was awarded honorary membership of the GLDA in 2021.

Cor van Gelderen is owner of the Esveld nursery in Holland, which is regarded for having one of the most extensive garden plant collections in Europe. He is also the author of a number of books on plants, such as Maples for Gardens and Encyclopedia of Hydrangeas, as well as a number of publications on Dendroflora. In his last book, Hypernature, he shares his views on garden design and the vital role a good planting scheme plays in creating a garden.

Leslie Moore joined Dublin City Council as City Parks Superintendent at the end of February 2012. A graduate of UCD, where he studied Landscape Horticulture (B. Agr. Sc.), he also has a Masters in Local Government Management from the Institute of Public Administration.

As a horticulturist and landscape architect Leslie worked with the former Dublin County Council and South Dublin County Council and Dun Laoghaire Rathdown County Council, where he led the planning, design, and development of a number of significant improvements to parks, gardens, and visitor facilities, such as the tearooms in Killiney Hill Park, Cabinteely Park, Marlay Park, and the People’s Park, Dun Laoghaire. The Japanese Courtyard Garden in Cabinteely Park is a project of which he is particularly proud.

In 2011, Leslie led the first Open Space Strategy of any local authority in Ireland and he published one for Dublin city in 2016, which took a strategic look at access for citizens to quality parks, open spaces and recreational facilities. Leslie is now implementing an ambitious programme for the greening of the city, with new contemporary parks opened in the Liberties (Weaver Park 2017 and Bridgefoot St Park 2022) and other parks and public spaces re-developed.

Tom Curtis is a botanist and horticulturist with over 40 years’ garden and botanical experience in Ireland and abroad. He trained at the National Botanic Gardens and Mount Congreve Garden, Co. Waterford, before graduating in botany from University College Dublin. He obtained his doctorate on Irish orchids from Trinity College Dublin.

Until 2001, Tom worked in the National Parks and Wildlife Service, latterly as Chief Scientist dealing with conservation research. Currently, he is a freelance Botanical Consultant covering a wide variety of activities, including garden tours, genetic conservation in horticulture and agriculture, and restoration programmes for rare plants. He has many papers and books to his credit, including the latest with Paul Whelan, The Wild Food Plants of Ireland. He has been a judge at Bord Bia Bloom since 2015.

Jim Buttress is a judge at many shows, including the RHS Chelsea Flower Show, the RHS Hampton Court Palace Garden Festival, and South East in Bloom. He was Chairman of London in Bloom for 10 years and is Chairman of the London Gardens Society.

Trained at Wisley, Jim worked for Croydon Parks, the Greater London Council, and The Royal Parks, where he ended his career as Superintendent of Greenwich Park. He was a Trustee of the Gardeners’ Royal Benevolent Society (Perennial) and is an Associate of Honour of the RHS. He was awarded a Fellowship of the Institute of Horticulture in 1999 and achieved the highest accolade in the gardening world, the Victoria Medal of Honour.

Jim devotes much of his time giving talks to societies and charities and has gained renown for his television appearances.

Daphne is a graduate of Trinity College Dublin where she completed an Honours degree and PhD in Botany. For the past 20 years she has combined her expertise and knowledge of plants, ecology, and gardens with her artistic skills in a successful garden consultancy practice working throughout Ireland. The gardens she has designed and restored all reflect her interest in using more unusual plants and planting combinations, with special attention to colour, and all are designed with her intuitive sense of place and with sustainability in mind.

Prior to establishing her practice, Daphne worked as an environmental consultant and managed the Shackleton Garden at Beech Park in Clonsilla, Co. Dublin. As a botanical artist she has exhibited in many group shows and undertakes private commissions. Daphne lives in Co. Cavan, running an organic farm, painting, and gardening.

Paul works for the Office of Public Works and has been employed as the Parks Superintendent for the Phoenix Park since 2016. He has worked in the management and maintenance of parks and historic gardens for almost 20 years. He has previously worked in Dundalk Town Council and more recently with Fingal County Council.

Brendan Sayers is a horticulturist with years of experience working at management level in historic properties. He specialises in Belizean and Irish orchids. With botanical artist, Susan Sex, he published Ireland’s Wild Orchids and Ireland’s Wild Orchids – A Field Guide. In 2011 he received the H.H. Bloomer Medal from the Linnean Society of London for raising the profile of Irish orchids.

Brendan has worked closely with the botanical art archive of the National Botanic Gardens. He is an honorary member of the Irish Society of Botanical Artists , working with them on their publications and exhibitions. In his formative years he worked in horticulture in New York and New Jersey, before returning to Ireland in 1993.

Alexandra Caccamo studied Botany at Trinity College Dublin and the Royal Botanic Gardens Edinburgh before going on to work in the Botany Department of Liverpool Museum. After returning to Ireland, she retrained as a Librarian and spent over 13 years working in the Library of the National Botanic Gardens, Glasnevin. There she was responsible for curating and cataloguing the collections in the Library, including the botanical art collection. She is now the Special Collections Librarian at Maynooth University.

Deborah Lambkin studied at the National College of Art and Design and has been working as a botanical artist for more than 25 years. Since 2005 she has held the position of Orchid Artist to the Royal Horticultural Society Orchid Committee.

To date she has contributed more than 500 orchid paintings to the Royal Horticultural Society’s Orchid Painting Collection. In 2014 she joined RHS Picture Advisory Panel, which includes judging at the RHS Botanical Art shows. She also undertakes freelance work for the Royal Botanic Gardens Kew, London and The Eric Young Orchid Foundation in Jersey.